Today would have been the kid’s final day of school. The last day of school is like a party.  They play games, run around like crazy people and eat a Dilly bar.  What could be more awesome?  So I was fortunate enough to have the day off today so I tried to recreate a field day as best I could.  Here is what the kids had to say about it….

Ellen: I liked field day here better than school because there were more activities.  My favorite activity was either the kayaking or the volleyball games.  It was a really awesome day.

Fiona: I liked field day better at home too, there was more stuff to do.  There are better breaks, like lunch.  My favorite game we played was the chalk drawing contest or the volleyball contest.  It was a great day!  Riding the go kart was also pretty awesome.

Fletcher: My favorite part of the day was shooting the basketball game.  I won.  I also won the chalk contest because I drew a turtle with its eggs.  The best game we played was the go kart.

Finley: Field day at home was really fun and I think it was even better than the school field day.  It’s really fun.  My favorite activity were the basketball games.

I’ve been reading so much lately about on line school and the issues it’s created for kids across the country.  For those of us that have homes with loving parents, high speed internet and stuff to do…it hasn’t been too terrible, because in many ways, we are the lucky ones.  Sure, we’ve all had our cry in our closet moments during this pandemic but overall, our kids have it pretty darn good.

So today, on what would have been their last day of school (mine is tomorrow) I am incredibly grateful for our children and for their experiences as I was painfully aware today that their experiences are pretty special and in some places…not the norm.

It is our hope that we raise kids who are also grateful for all that they have and that they don’t take any of it for granted…ever.  Gratitude is really important.

So today my message is gratitude.  I’m thankful for the opportunities I’ve been given that have given Bryan and I the chance to give our kids the life they live.  GOD is good.

Below are the highlights from the day.  I didn’t catch them all because I was busy playing or refereeing but I tried to savor a few. 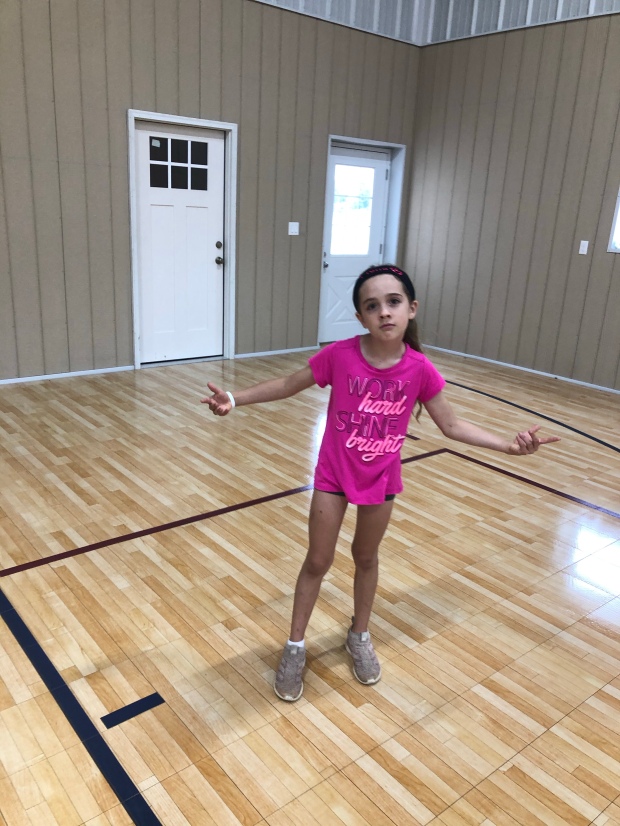 At the start of the day Fiona said “bring it” to the boys for our girls vs. boy games. Can’t say I hate this side of her…it’s pretty spectacular! 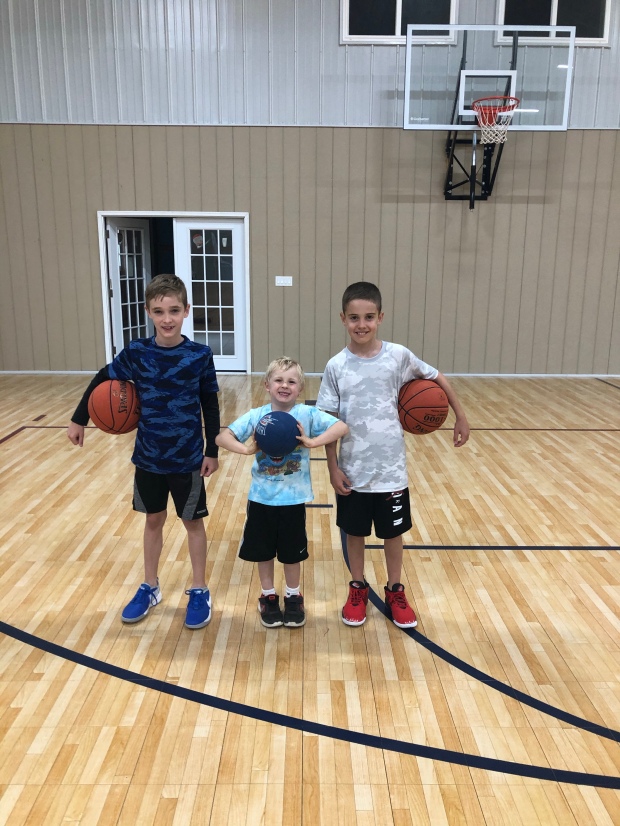 The boys were quite excited about their “matching” ensembles.  Camo-ish for the win! 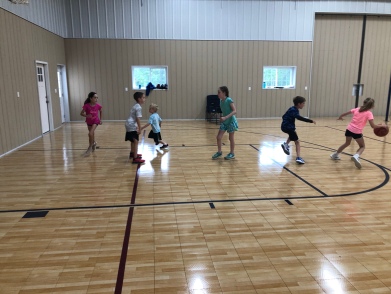 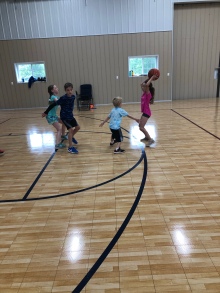 Some of our first games were basketball related.  We had a shooting contest and a 3 on 3 game.  Watching Fletcher play “defense” was for sure my favorite part. Hilarious! 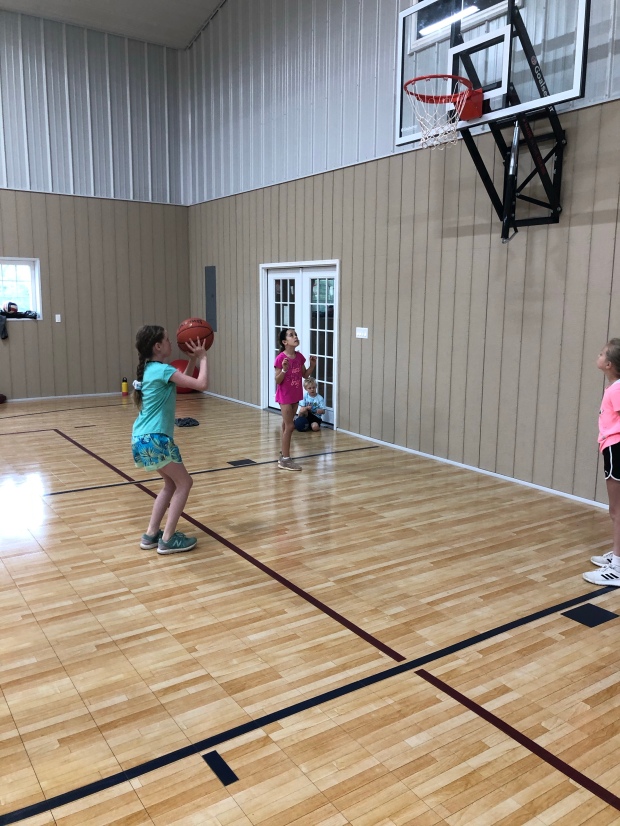 It Fletchy’s mind he scored the game winning shot.  Finley picked him up afterwards and this is what he had to say.  Sadly I didn’t get the shot on film.  Not sure many 5-year-olds know who Jerry West is…but this one does.  RESPECT! 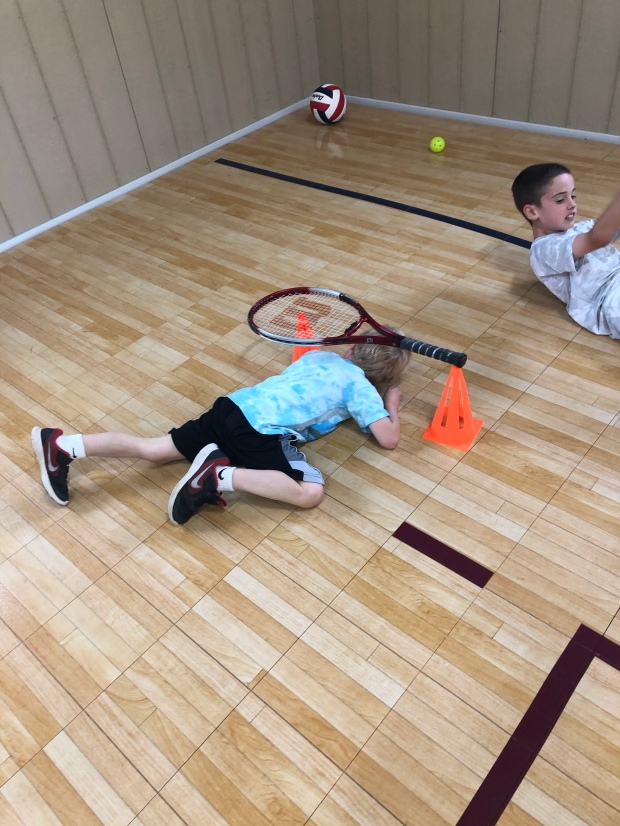 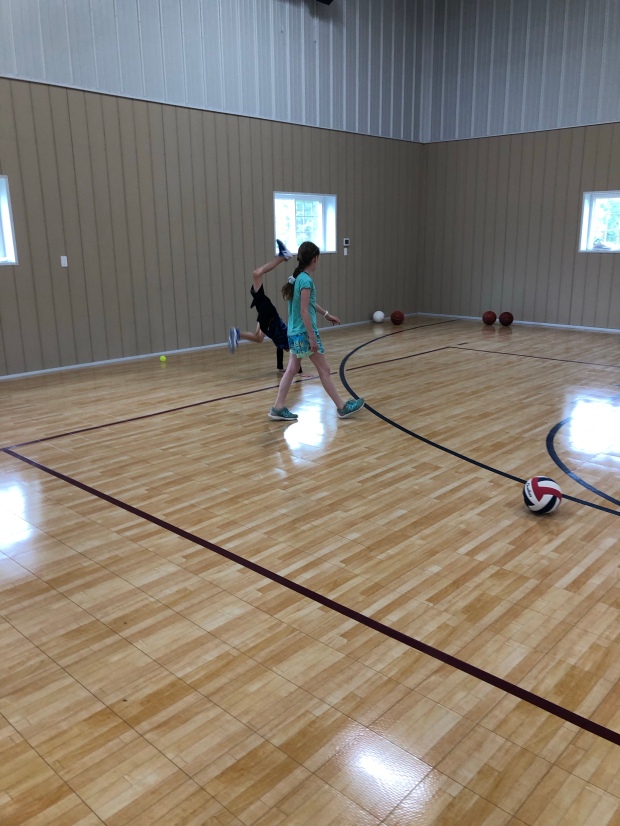 One of the several obstacle courses we attempted. The boys doing cart-wheels was a sight!  They wanted me to climb under that tennis racket…Yikes! 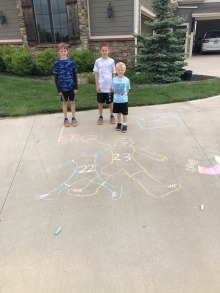 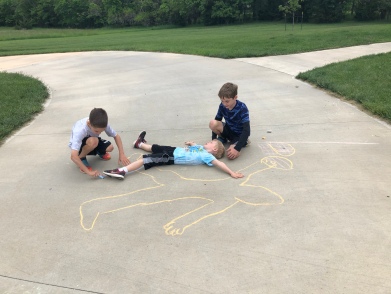 The boys masterpiece.  Michael Jordan (note his signature tongue handing out dunk) dunking on Clyde “the Glide” Drexler (Finley’s words…not mine).  They were pretty proud of their work! 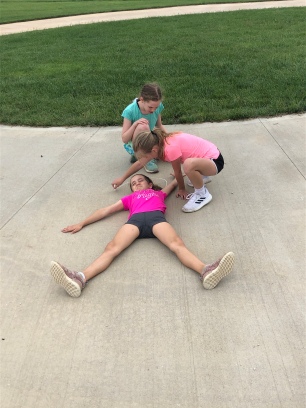 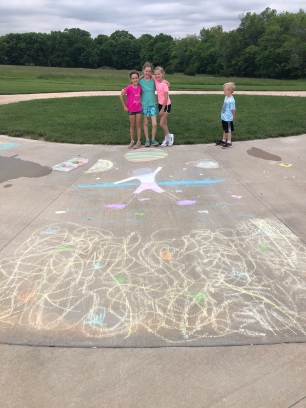 The girls masterpiece consisted of a space woman who was half in space and half on the beach in the water!  I loved the creativity!  They also got bonus points for the rainbow moon. 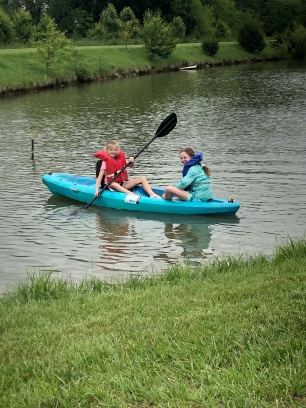 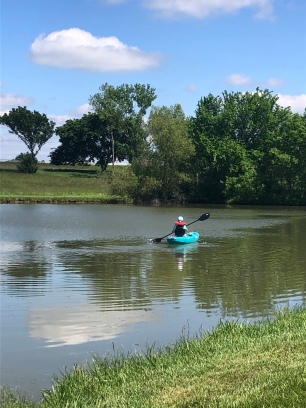 The kayak race was also a fan favorite. 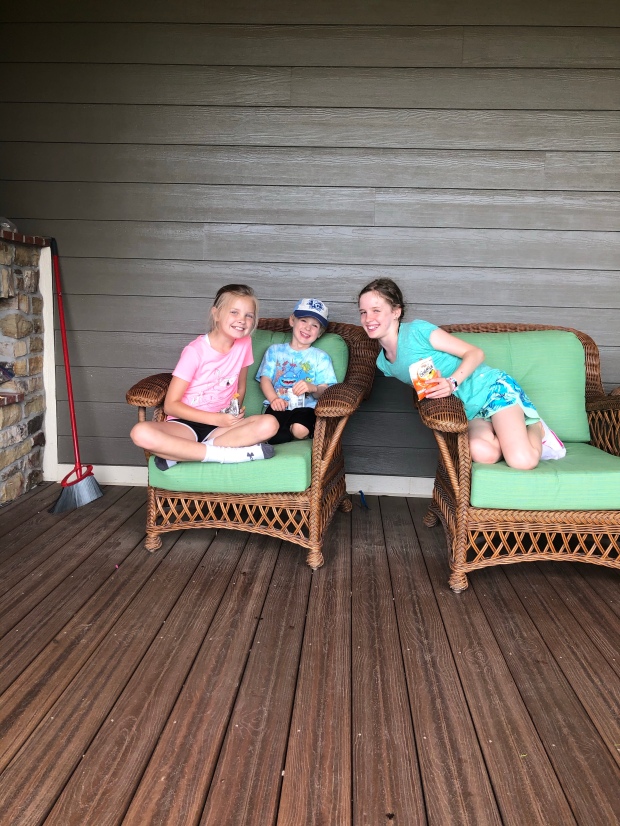 Kids had a full and fun day.  So many things not pictured here though, I was good at the beginning of the day not so good in the middle.  I got no photos of the volleyball games we played, go karting, soccer or capture the flag.  Finley was comparing the list of the things we did today to the list they made last night and we hit quite a few of them so he was satisfied.

Cooper asked tonight when I put him to bed when we can plan the next one!  Good times!