Today I spent part of my day helping out some friends at their charity golf outing.  It’s one of my favorite events of the year for several reasons.  One, I get to see one of my oldest and dearest friends.  Two, I get to help one of my oldest and dearest friends and finally, I love it because she raises a ton of money for Braden’s Hope, an incredible organization that fights to find targeted cures for Pediatric Cancer.

It’s almost September (which is crazy) and that means Pediatric Cancer Awareness month.  That means the whole month is about raising awareness and money to fight the leading killer of kids.  That’s right…cancer. 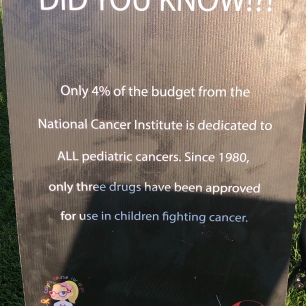 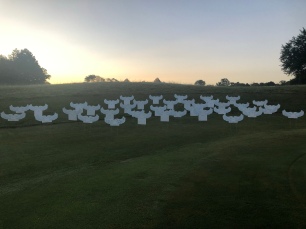 There are hope heroes and angels. These are angel wings representing sweet kids that lost their battle to this horrible disease.

For those that have known me awhile they know this is a cause near and dear to my heart.  In large part, because my friend’s daughter, Callyn, was diagnosed with a rare childhood cancer called Retinoblastoma for the first time before the age of 3.  She was diagnosed a second time less than 2 years later.  But also because as a teacher at St. James I attended three separate funerals for students whose lives were taken way to early by this horrible disease.

Watching my friend, her husband and her two children navigate the horrors of childhood cancer has been nothing short of amazing and inspiring.  They were given a cross that would tear a lot of families apart, it did the opposite to them, they share an incredible bond.  They were handed a burden that many couldn’t bear…they didn’t only carry that load but they kicked it right in the ass.  Part of that starts with their sweet baby girl Callyn.  She is brave and fearless and has undergone more procedures than I can even keep track of over the years.  Each time she has to be put under anesthesia she is so strong and brave.

Her big sister Taylor has been taken on a journey as well and she is Callyn’s biggest cheerleader, supporter and friend. 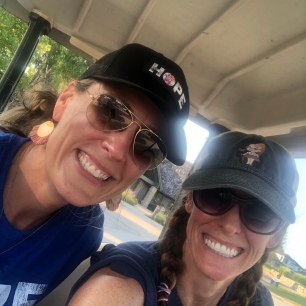 Kim and her husband Mike decided that they’d take the load they’d been given and turn it into something good.  Four years ago they started Callyn’s Course for Hope.  In four years they’ve raised hundreds of thousands of dollars. I cannot wait to hear what the number is this year.

To see my friend, pull this off for the fourth time and during a pandemic no less, made me swell with pride as it has the past three years.  Kim and her family are a force to be reckoned with and an inspiration to all people who encounter their goodness.

For a little while tonight I had our daughter Fiona there at the course with me.  Callyn is her age and they are good friends.  There is something so special about your kids becoming friends with your adult friend’s kids.  On the way home we talked about what Kim, Mike, Taylor and Callyn were doing with their golf tournament.  Fiona is a big fan of the Lemon Out event we run at St. James to raise money for another pediatric cancer foundation so she understands what a fundraiser is and why it is important.  She also understands that her friend has been really sick.  She remembers praying for her before all her procedures and worrying about her when the cancer came back a second time.

On the drive back home Fiona and I were looking out the window and out one side of the car windows you could see the sunset and out the other you could see the moon.  Fiona said to me “mom, GOD is a really good artist.”

That comment lead to a beautiful conversation.  We talked about how GOD created all things, like the sun and moon but that he also created all people, like her and her siblings.

We talked for a few minutes and she said to me “Mom, GOD is a good artist at making people too.”

To which I replied, “yes, he is, he made you and you are pretty special.”

But this…this is where I about lost it.

She laughed to my comment and said “thanks mom.”  But her next comment nearly floored me.  She said “GOD sure did something right when he created Mrs. Kim, cause she’s raising crazy amounts of money for kids with cancer and that’s pretty awesome.”

Fiona is 8 years old and she nailed it.

GOD’s artistry in creating all the members of the Stanley family was off the charts.  They are really good people that were dealt a crappy hand of cards.  Instead of whining about it, they took it and made it into something amazing, beautiful and fruitful.

I am proud to call them my friends.  Fiona is too.

I’m going to go to bed tonight and thank GOD for his artistry…and for that conversation with my sweet girl.