Today we had Colorado like weather and we told the kids they had to do as much stuff outside as possible. We challenged them to do so much that the list they could write at the end of the day would be insane. I’d say they were off to a pretty good start because by noon we had played a wicked whiffle ball game, went on a long bike ride and played about 4 games of soccer.  So I’d say they did a good job of making that time outside thing happen.

After lunch our cousins and some friends came over and things really took a turn!

We played some barn volleyball which was very u-g-l-y…but who cares, they had fun.

When the volleyball game got old we sent them back outside to play whiffle ball, which they did for a fair amount of time.

But…the fish were calling.  All the kids wanted to go to the pond and fish.  Little did I know that some of the kids had something else in mind. One of the kids’ friends came and asked to put on his swimsuit.  Which to me, indicated swimming.  We don’t have a pool…just a pond.  Suspicious.

I guess it’s safe to say that sooner or later it was bound to happen.  We just needed some friends who were a bit braver than us…today…the kids swam in our pond.

The kids discussed swimming in the pond for all of about 3 minutes before Fletcher, Cooper and friends jumped in first. I can’t say that I wasn’t thoroughly grossed out but man it was fun to watch these kids play like there wasn’t a care in the world.  What a blessing to be a young child right now.  Seriously, they have a freedom like we can’t imagine anymore as adults.  It was so liberating and thoroughly enjoyable to watch them jump off the dock over and over and laugh and talk about fish swimming past them or the mud they had to step in to get out of the pond.

Sadly, we didn’t have enough life jackets for all the kids jumping off our dock but they were pretty good about sharing.  So I learned two things today…first, we need more life jackets and second we need a ladder coming off the dock.  The kids didn’t like having to walk out on the muddy bank, but it didn’t slow them down for too long.

What an amazing day it was.  We spent the entire day outside enjoying this rare and beautiful August weather with our cousins and friends.  Pretty awesome stuff…now please excuse all the pictures! 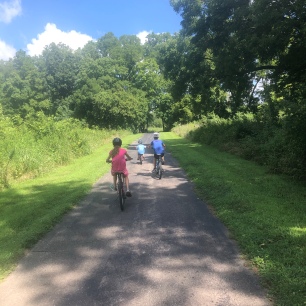 I love family bike rides for so many reasons.  The field of sunflowers didn’t hurt this morning!  Fletcher was rocking his shark helmet, his Perez shirt and was definitely wearing a rosary around his neck!  So stylish!  Fiona had to wear a baseball helmet because we couldn’t find all our bike helmets.  Such a good sport!

Whiffle ball game.  I must admit, hitting this little yellow ball is harder than it looks.  It’s been awhile since I’ve swung a bat for real but man it took me awhile to get back in the groove. 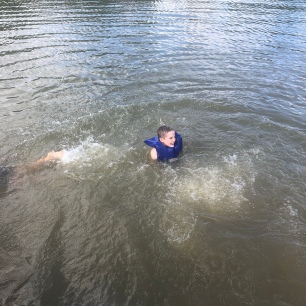 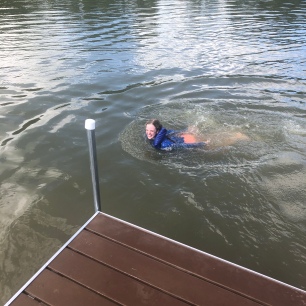 They are much braver than I am!

Fletcher was as always fearless. He was among the first in the pond with his big brother Cooper, also fearless!  Finley, the responsible one had to run to the house to grab more life jackets! 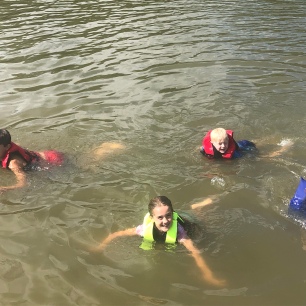 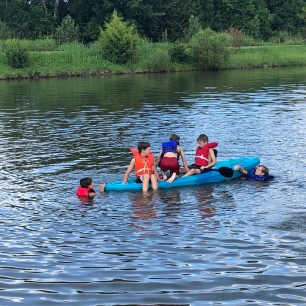 The kayak even became a part of the fun!  They even tried to pull each other out of the water.  Crazy people. 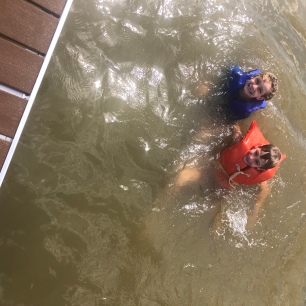 Some of the braver folks even swam out to the middle of the pond…no thank you! 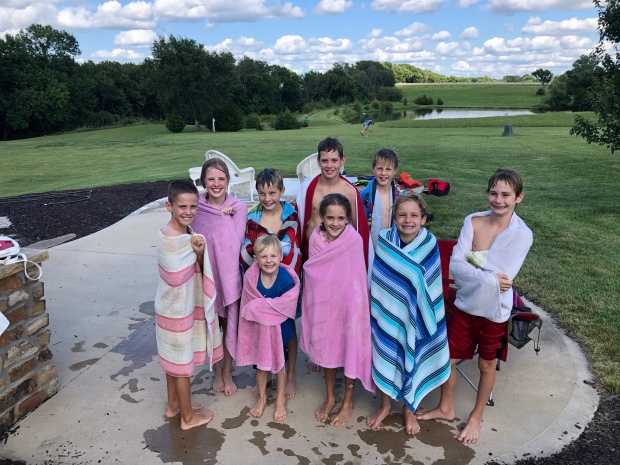 Post pond hose down…freezing cold kiddos.  But totally worth it for the pond fun!