Cooper: We had an awesome day.  My favorite parts were fishing with Finley, playing basketball at the barn and swimming at Hunter and Logan’s.  Our scavenger hunt was pretty cool too!

Finley: Today was the best!  My favorite part of the day was swimming at Hunter and Logan’s, playing basketball with Cooper in the barn and our scavenger hunt, and fishing.

Ellen: Today was so fun.  We had volleyball in the barn and I loved that.  I also liked the scavenger hunt and swimming.  Hunter and I made up a game in the pool that was really fun.

Fiona: Today was great.  I loved Mommy’s crepes I’ve been asking for them for a long time.  Then I’d say volleyball was awesome, swimming and the scavenger hunt!

Fletcher: The best part of my day was crushing rocks with Logan and the scavenger hunt. The boys beat the girls.  We were done first.  It was awesome!

We started the day with crepes.  The kids have been asking me for crepes for so long I’m glad I was able to make that happen.  The pressure to create these fancy breakfasts is intense.  They will miss those if and when they go back to school!

Then we decided to whip out the scavenger hunt their cousin Courtney and Chris sent our way.  It was all based on colors.  The kids had to find something for every color that was in nature.  The kids teamed up boys vs. girls.  The boys won the first round with the colors so we had to reinvent the game to give the girls a chance for a victory.  This round was by the alphabet…so they had to find an item for each letter that could be found outside.  It was fun to see how creative they got on this round.  For example, for the letter “a” the girls had an “alive” animal…a snail.  I gave them props for creativity. The girls did win this round.  So we all got a W!

Before the games began this morning!  We were ready to go!

The boys with their treasures.  I had to deduct a point for the large leaf they pulled off our neighbors plant.  Ugh.  It was winning at all costs I guess for the boys!

The girls and their colorful collection of goodness! 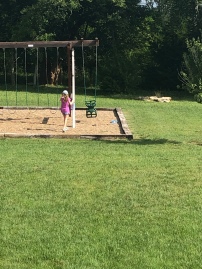 Both teams trying to remember what letter each item stood for.  Ellen and Fiona each took off a shoe because that “represented” their respective selves.  E was for Ellen and F was for Fiona.  The shoes represented their presence.  They make me laugh.

After this, Ellen’s classmates came over for an open gym.  We are working on the pass, set, hit combo instead of sending the first ball immediately over (which makes me crazy) on the first pass.  They have improved so much and it is very fun to see them try these things that are a lot harder! They will be entering the 5th grade this year!

After Ellen’s group, Fiona’s classmates came for an open gym.  They will be starting 3rd grade this year which is when volleyball starts.  Personally, I think it’s pretty early for them to play in games as all that happens is serving and aces…but it’s good to start learning the skills.  This is what we are working on…skills, skills, skills!  From their first session there has been a lot of improvement, so that’s exciting!  They can all serve the ball over which is half the battle at this age so it was a successful session.

I love to teach this game so much.  I love seeing how in a short period of time someone can really get a lot better.  I miss it…I want in the gym, my high school gym, so badly.  I pray that we can get our Covid numbers under control so those kids can have a season.  I know that in the grand scheme of things it isn’t life or death but man…I know how much it means to me and I don’t even get to play in the games.  These high school kids need their sports.

When the open gyms were over we all stayed down in the barn to play.  The boys played one on one and the girls and I played more volleyball!  It was a total blast.  I love to watch them play anything so it’s always a good time. 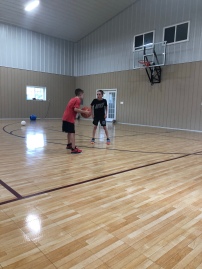 The defense being played was fierce!

Not my best work but I want this memory.  They played like this for a long time, no complaining, no fighting…just two brothers trying to make each other better.  The best!

After volleyball we went over to my sisters for swimming and dinner.  Any meal I don’t have to make is a win for me!  It was delicious and the kids had a blast, as they always do at their cousins house.

It was a very busy but full day.  I know I say it a lot, but it needs to be said, these kids are so blessed.  I am often very hard on myself as a parent.  I can think of 50 things each day I could have done better but I know that I am doing a lot of things right. These kids are busy all day playing with each other, playing with us (my back may feel the effects of today come early morning) and they are so incredibly loved.  At the end of the day, nothing matters more.  As Bryan always reminds me, all those other things will get done, they always do…but watching our 5 kids play together and get along and laugh and sing is the greatest gift as a parent.  I don’t ever want to forget it.