I have to admit today I was driving the struggle bus.  The day started out normal, I made everyone breakfast, worked out then spent a few hours in the barn…but after I made lunch I hit a wall…a big one.  I felt like my arms and legs each weighed 1,000 lbs. and all I wanted to do was sleep.  Also, I felt grouchy.  This is not a norm for me and I wasn’t a fan.

Since the Covid pandemic I think I’ve hit just about every mood there is…the happy to have more time at home mood, the anxious for school and sports mood, the angry that this isn’t over yet mood, the grateful for my family mood, the I want to hide in my closet and cry mood…all the moods.  However I am not sure I have felt this tired during the pandemic yet…it was weird.

I’m happy to report I made a strong comeback…with the help of our friend, JESUS.

Since corona hit we have not gone to mass as a family (Bryan and I did get to go to Fiona’s First Communion).  We have been watching “puter” church as a family since this all started.  Today, that changed.

I have to tell you…it was glorious.  Once you get past the wearing a mask thing and the no singing thing (I must admit I’m not a fan of this rule…singing in mass is my favorite) and the having to have a “reservation” for church thing…it’s totally normal!  I was very nervous when this all started to go to mass because of my mom and I didn’t want to go pick up germs that I could bring home to her…but the truth of the matter is, I am starting school very soon so there was no reason to delay.  Plus, there is no one sitting in front of you or behind you, this fact really confused Fletcher.  He kept asking why.  Keep in mind this is the child that is usually entertaining everyone around us at mass each Sunday.  He missed the socialization piece of mass for sure…but that’s no big surprise.  This kid loves his people.

We all got dressed up…I have only done that one other time during the pandemic and that was for Fiona’s Communion.  It was so nice to see the kids out of their athletic clothes.  Ellen even humored me and wore a dress (Fiona…not so much).  The boys wore collared shirts.  It felt almost normal.

No one complained about the masks either.  That was a pleasant surprise. Fletcher didn’t wear his properly but I think that’s because it was too big.  His cute little nose was hanging out and every time we tried to fix it a few seconds later it was back to it’s starting point.  I made a point to look around at the other families there and most people didn’t mess with their masks at all.  That made me feel hopeful for some reason.

Today was also the first time Fiona got to receive Communion since her big day, so she was pretty excited.

So, I went from feeling like it was hard to move from being so very tired to feeling completely energized after mass.  I don’t think that’s a coincidence.  I’ve been talking to GOD each day and night but there is something about being in his house that makes it seem so much more personal.  Also…getting Communion…that was the most awesome.

When we asked the kids their favorite part of going to mass each of them said the same thing, getting to receive Communion.  Fletcher, who isn’t old enough to get it yet said “seeing JESUS.”  He also pointed out that mass seemed really short.  He was right.  Mass was over in under 45 minutes. Without a whole lot of music and with such a small number of people in mass it moves a lot faster that’s for sure.  I’m pretty sure Fletcher was a fan of that!

When we got in the car the kids actually thanked us for taking them to mass.  That…was my favorite part!  My heart!

After mass we decided to treat the kids to dinner on a patio.  They have not been in a restaurant this entire time (except for the patio we ate at on the lake).  We went to the Other Place that has a large patio so we could safely social distance and eat a meal together.  It was amazing how such a simple thing made them all so happy.  We talked about mass and how it was fun to have gone again and we debated about what to eat and again, it felt, almost, normal.

A little Dairy Queen in the car on the way home sweetened the deal and this turned out to be a super great day with some super awesome people.

It wouldn’t be a day in quarantine if we didn’t fish a little bit. 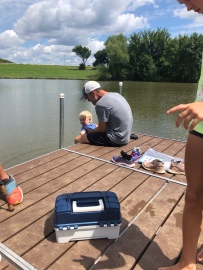 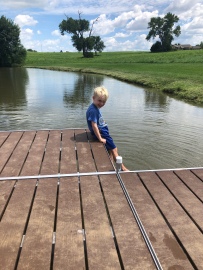 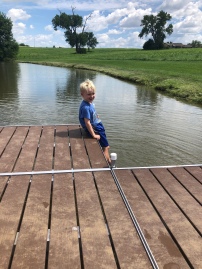 Daddy let Fletcher dip his feet in the pond to “try to catch a fish” and then he went to the shallow end of the dock to try it himself.  Life vests from now on always…this kid is going to jump in this water I just know it! 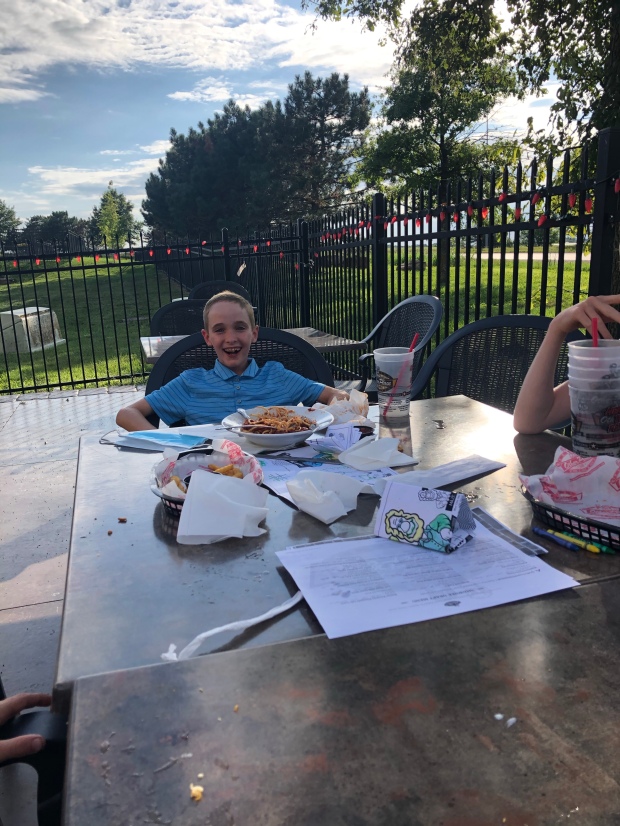 We learned that Cooper should NEVER eat spaghetti on a first date.  Seriously, it’s like he grew up in a cave, it’s a good thing he is so cute. 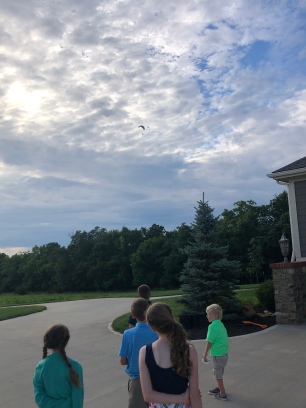 To top it all off someone was parasailing over our house when we got home.  The kids thought that was pretty awesome and wanted them to land on our house!