I will begin today by saying that I think today, regardless of how people felt about Governor Kelly’s decision, has been long awaited by many.  While I am still uncertain how I feel about any of this, as I feel my emotions change on it daily, I am glad that the state has finally come out with their plan…or at least part of it.

For those that missed it, or simply for history’s sake, Governor Laura Kelly announced today that she would delay the start of school until after Labor Day.  So that means we would start September 8th.  Before this announcement schools were planning to proceed (hopefully) as normal.  So for me that meant I’d start teacher meetings August 6th and we’d have kids the next week, August 14th.  Our own children were scheduled to start August 18th.  So this executive order, if approved by KSDE will delay school starting for about 3 weeks.

Now…this has a considerable effect on high school sports as our first play date was to be August 29th.  Tryouts were to begin August 17th.  Before the new proposed start of school my squad would have already played 5 matches.

So, I’m going to give myself time to process.  I’m going to continue to be in contact with KSHSAA and I will do what I can to safely get our kids back in school and back to sports.

Some friends and family texted tonight asking how I felt about the announcement and the honest answer is…I don’t know yet.

One thing that has been hard through this whole thing is I haven’t been able to be in a room with my people.  Meaning…people I work with.  We haven’t been able to have an in person meeting for 5 months.  I want to talk through this with them.  I want to brainstorm, problem solve and COVID has even taken that away…because to do that effectively via zoom…is NOT a thing.

I have to process.

I am very interested to see what KSHSAA comes up with in regards to this announcement and I’m going to remain hopeful that we will be in school and playing sports at some point.

Until I know exactly how I feel, I’m going focus on my day.  One day at a time, as it appears, that is all I can really control at this point anyways.

So here is everyone’s highlight from today:

Finley Joe: The best parts of the day were that we got to play basketball and I played well, it was so much fun.  We also got 9 catfish today.  That was a big event of my day.  It was the first catfish I’ve ever caught.  It was awesome.  I also liked cooking with mom and listening to Hamilton songs.  Today was fun and I liked it.

Ellen Anne: The highlights of my day were catching the catfish, I have only ever caught one before.  I also liked hearing I had no cavities at the dentist.  It was a really fun day today.

We were pretty excited about these catfish.  Ellen nabbed the first one!

Cooper Claerhout: The best parts of my day were basketball, going to the dentist, catching a lot of fish and playing kickball in the barn.  All of those things were super fun.  I liked it all! 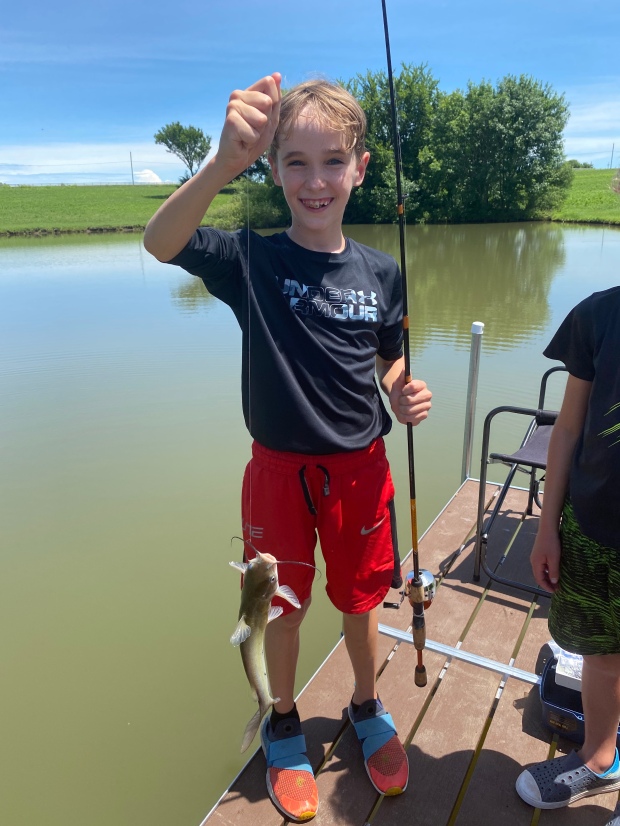 The “I caught a catfish” smile.  So stinking sweet!

Fiona Bell: The highlight of my day was catching 9 catfish with my siblings and cousins.  I also really liked playing kickball.  It was a fun and awesome day!

Fletcher: The highlights of my day were playing hockey in the driveway with Cooper’s hockey stuff and playing kickball and getting like 25 homeruns. Catching fish was pretty fun too.  Logan caught like the biggest fish ever.  He let’s me pet the fish and then throw them back in the water.  It’s awesome. 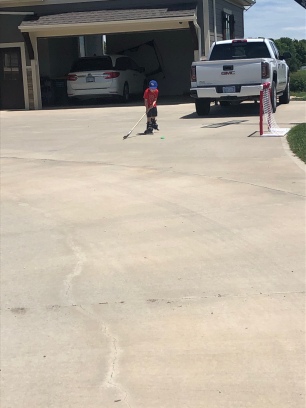 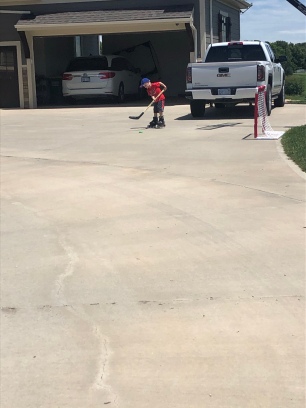 This guy.  He played hockey by himself for a solid hour.  He’s pretty darn good on those skates.

Mommy: I have quite a few, the first was talking with the kids in the car on the way to the dentist.  It reminded me how much I miss our daily rides to school.  We celebrate someone else’s awesome, we talk about how to be a leader, we talk about everything. I miss those conversations, and today driving to the dentist first thing in the morning, felt normal.  The second was watching Bryan play basketball with the boys.  He’s so good with kids, it’s one of the things I love most about him and watching our boys grow in their ability in a game they work so hard at and they love so much fills me up.  The third was watching the kids catch catfish.  I was down there when Ellen caught the first one and the genuine joy Finley, Logan and Cooper had for her was so much fun to watch.  Then their excitement to keep catching fish was just so darn sweet.  The fourth was our daily cousin kickball game.  I had music pumping in there and my nephew Logan was dancing the whole time…just made me smile.  Also, Fletcher played the whole time, he doesn’t usually play and the kids were so good to him.  He got a “home run” every at bat and they even let him pitch.  Fifth…I got to have a conversation with my mom.  I always cherish any time I get to chat with my mom.  Finally, Bryan and I took Gigi for a walk tonight once we got the kids settled.  It was nice to walk and talk with my best friend.  So I refuse to let any decision about school right now ruin a perfectly good day.  I will worry about that tomorrow when I’ve had some time to process.

The dentist!  Not my favorite place but my kids love it for some odd reason. 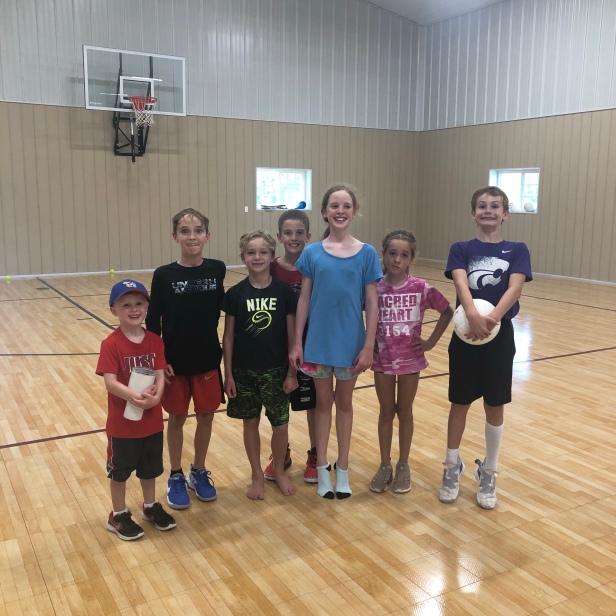 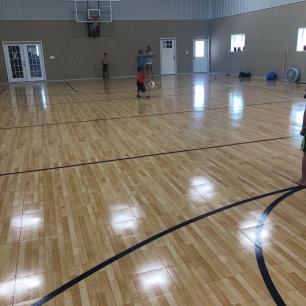 A picture of the kickball crew (Ellen is on her toes trying to be the tallest, Cooper looks insane, Hunter looks surprised and Fiona looks like she’s ready to play), Fletcher pitching it up and Gigi even got in on the action today.

Daddy: The highlights of my day were watching the kids reaction to watching Ellen catch the first catfish of the day and how Logan and Finley helping her real that big boy in.  There were no cavities so all that time we spend brushing is paying off.  I love watching the boys play basketball.  I’m incredibly thankful for an inch and a half of rain too!

Gaga: I am thankful that I got to watch Hamilton today and I had time to read my book!

Pretty awesome I was able to catch part of the reaction on video!  Love them! 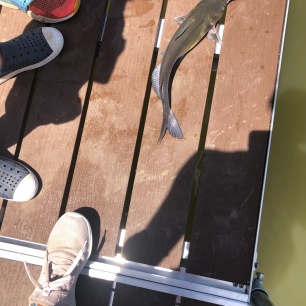 I mean that catfish Logan caught was the real deal. Logan is the fish whisperer.  Keep in mind we are fishing in a pond and I know nothing about fishing…so I say that fish is pretty darn big.  So cool!  They were so excited it was crazy and so much fun to see their genuine joy for each other.

Tomorrow is another day and we will figure all of this out at some point so until then…keep the faith.