Today, I want to thank all the people who get stuck sitting around our crazy family at mass.  Yes, at church.  I want to celebrate the awesome of all the people who sit around families like mine, who are wildly distracting, yet still manage to get something out of mass.  I also want to celebrate the awesome of families like mine that get their kids out of bed and to mass to learn about the importance of having GOD in their life.

First, let me paint the picture of my family at mass.  There are 8 of us.  My mom, my husband, Bryan, myself, and our 5 children, Finley, Ellen and Cooper who just turned 7, Fiona who is 5 and Fletcher who is 2.

Now, Ellen and Fiona want to follow along with every single spoken word of the mass.  No, literally…every. single. word.  So they diligently shuffle through the program we are given when we walk in and are constantly asking for help to find the right page or the right line of the song.  Ellen, GOD bless her, sings loudly, in an extremely off key tone.  So loud in fact, there have been times, people across the pew have actually laughed out loud.  I have done the same.  Who wouldn’t, it’s awful really.  But I would never discourage my sweet 7-year-old girl from singing in mass.  She loves it and even though it isn’t pleasing to the ear, it’s so beautiful in it’s own way.  The innocence of her not knowing she is terrible to the pure beauty of her wanting to participate because “mommy, singing is like praying twice!”  It’s the kind of awesome you can’t squash.  It’s perfect.

Fiona often feels it’s necessary to get in some liturgical dancing while she’s attempting to sing louder than her sister.  One morning I caught the eye of a friend literally across the entire church.  She was very entertained by Fiona’s passionate interpretation of the song we were singing.  After mass I got a message from her saying how much she enjoyed Fiona’s performance and that on that day she needed that GOD moment.  I guess that was a good thing, at least her crazy dancing brought a smile to someone that day.  The best part is that she is oblivious to the fact that anyone is watching her or that is might be distracting to others.  She’s in her own little church world.  If she isn’t dancing she is usually trying to get on of us to pick her up or giving us a copious amount of kisses.

Our two 7-year-old boys have their own bag of issues in mass. Finley is quiet but needs to go to the bathroom at least once, usually twice per mass.  He also asks at least 10 times if there will be donuts after mass and if Mommy will be cool this time and let them get one.

Cooper is good, but doesn’t know what an indoor voice is, so he’s loud, very loud and he always sits next to my mother, Gaga, who is deaf.  Not literally deaf, but pretty darn close.  The two of them converse during mass at times and neither one of them whispers.

That brings me to our 2-year-old, Fletcher.  He’s, well, he’s a maniac.  He is either wanting to flip upside down over the pew in front of us, sing songs that are of his own making or yell “nack” aka snack or “wa wa” at the top of his lungs.  He later proceeds to spill a fair amount of his snack on the floor.  When he isn’t terrorizing me or his father he is flirting with whoever is sitting by us.  Playing hide and seek on my shoulder or flashing his dimples at the cute girls who sit by us.  Yes, it’s true, our 2-year-old knows how to flirt.  And, he’s good at it.  So I’m in trouble, but that’s a story for a different day.

My favorite Fletcher in church story is the time when he heard his siblings talking about how the “bad guys” crucified Jesus on the way to mass.  Well, 2 year old’s love bad guys but our 2 year old has a certain obsession with bad guys.  Everyone in our house is a bad guy at some point. Mommy, Daddy, Gaga, you name it.  So on this particular day he felt it necessary to say “Jesus (with only a slight pause) bad guy”  Yep, “Jesus, bad guy” was repeated over and over and over in his best “bad guy” voice.  This happened to the point where I could really just do nothing but laugh out loud and hope that the people around us weren’t extremely confused.  He later discovered the stained glass window of St. Paul where he holds a sword and moved on to “Paul, bad guy, sword”.  Yep!  It was a good day.  When we walked out of church that day I was exhausted. 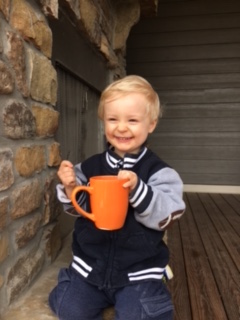 Here is a visual of our ornery little nugget Fletcher.  The smile says it all!  He’s a character

So this is my family at mass in a nutshell. To say we are distracting is an understatement.

But…to say that I don’t LOVE every single minute of it, would be a lie.  I love going to mass so much with my family.  The obvious reason is that my husband and I can pass along our faith and gratitude to GOD to our precious nuggets but the less obvious reason is I actually enjoy this chaos. I love to watch people respond to it as well.

I can so vividly remember being the 20 something girl in mass.  I was the one flirting with the cute blonde kid with the dimples.  I loved seeing families at mass.  It brought me joy, though at the time I’m not sure I understood why, other than that I have always loved kids.  What I didn’t know at that time was what a struggle it is sometimes for these families to get to mass.

Getting 5 kids under the age of 7 to sit still for an hour plus is hard work people.  Hard work. But the best kind of work.  And, let’s be honest, it’s not just the sitting for an hour it’s the getting them there.  Getting them up, fed, dressed and out the door in time.  That’s GOD’s work in action.  At least at my house, getting my kids in clothes that they didn’t wear to bed, that match or that don’t have holes in them is a very real, very serious struggle.  There was a period of time when one of our children was on a sock strike.  They literally refused to wear socks, in the winter.   One of our 7 year old boys, Finley Joseph, only wants to wear his KU Perry Ellis basketball jersey, which isn’t really church appropriate.  It’s a fight every single Sunday.  Every. Single. One. 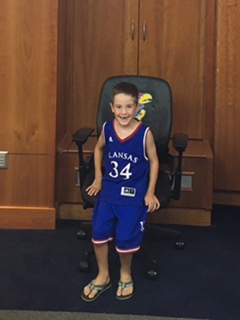 Here is Finley pictured in his Perry Ellis jersey, which he can be seen wearing for most social events.

At any rate, now that I’ve painted the picture…I couldn’t help but reflect on several things at church these past weeks.  First, I want to celebrate the awesome of all the parents out there fighting the good fight.  That take the time, energy and effort to get their kids to mass. Whether you’ve picked up the cheerio bag for the 27th time off the floor, shushed your children to be quiet for the 45th time or made 7 trips to the bathroom…let me be the first to say YOU. ARE. AWESOME.

I believe you will be rewarded in the kingdom of HEAVEN for this grace you are bestowing on all those around you, because make no mistake, children in church is a blessing to all those around them.  Even the ones that give you dirty looks because your kid looks dirty and the other one is being loud.  I am here to tell you to ignore those people.  They don’t celebrate awesome as they should.  The rest of us, that are in the same boat, or once were, or long to be, as I once did myself…they get you and they celebrate the heck out of your awesome.  Keep up the good work.

The second thing I thought about was how much I appreciated the kinds smiles, the laughs and the chats after mass that offer their support.  I want to celebrate your awesome.  Thank you from the bottom of my exhausted heart for lifting me up when Fletcher has tried to nose dive into the pew in front of me for the 15th time.  Your smiles and winks and looks of understanding make me happy and they remind me that our chaos isn’t distracting, it’s actually GOD in action.

Until next time, we will see you in the second pew, far right side!

One thought on “Second Pew, Far Right Side”